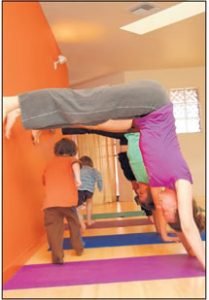 Why not hiss like a snake in cobra pose, imagine having feline grace in cat pose or pretend to be a tall, strong aspen in tree pose?

For adults, it’s the quiet meditative quality of yoga that helps shut out stress and bring together mind, body and spirit. But kids find that release from everyday life through play. So it’s only natural that yoga for kids involves plenty of fun and games.

Classes tailored to kids include traditional relaxation poses and breath work, but they also have plenty of cooperative poses, music, stories, props and other techniques to hold the attention of young minds.

“The most important benefit that kids are going to get from yoga is selfconfidence,” says Shana Meyerson, founder of California-based mini yogis. “In yoga, it’s not about perfection or mastering a pose. It’s about trying it.”

Meyerson adds that the nonjudgmental and noncompetitive natures of yoga are good for children, who can be coping with pressures from school and sports practices.

The catch? Finding a class for kids. So High Desert Yoga of Albuquerque has put together a broad effort to bring more kid and family yoga to the community.

“We wanted to offer something for the entire family so everyone could practice and share in the benefits of yoga,” says Heather Lee Farrell, director of the family yoga program at the studio. “Not a lot of yoga studios have offered the classes, and I think it’s just a huge opportunity to bring yoga into the family.” 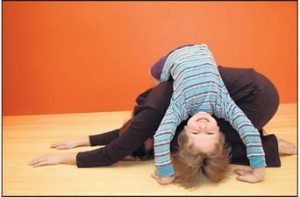 Meyerson will travel to Albuquerque this month to offer a mini yogis teacher training. This summer, High Desert Yoga will begin family Hatha yoga, teen yoga flow, toddler yoga and kids’ yoga classes both by age group and in a mixed ages class.

Other than a few isolated classes and some summer camp programs, there hasn’t been much yoga for kids and families in the area, Farrell says.

But the benefits can be tremendous.

A 2003 study of more than 400 students taking yoga classes at an innercity school in Los Angeles found that participants had higher self-esteem, improved behavior and health, and performed better academically.

Even kids have busy lives, with homework, sports and other after-school activities. They also have a lot of technology in their lives.

“Yoga kind of allows a space to counterbalance those things that are going on,” Farrell says, adding that children can learn to use breathing techniques to relax in stressful situations. “When we do that at an early age, it teaches us how to treat ourselves better.”

Denise Duran, who teaches yoga at Sandia Prep’s summer program, says her students love savasana, the classic yoga relaxation pose that involves lying on the back with eyes closed. Students aren’t taught how to cope with stress in school, Duran says.

“There’s a great opportunity to go into schools,” she says, adding that yoga also could be offered in after-school programs, clubs, as a component of physical education classes, at hospitals and other venues.

Yoga classes that involve parents and children together offer another kind of benefit: “It’s a really nice way to come together as a family and bond in a healthy way,” Farrell says.

Kristen Martinez, a personal trainer and group fitness instructor, agrees. She offers two Little Buddha Yoga classes for children and their families on Sunday mornings at The Open Gym in northeast Albuquerque.

Martinez, who plans to take the mini yogis training this month and to teach at High Desert, says she enjoys the instant gratification and creativity of working with children.

“Children are so open. You can look at them and see what they need,” she says. “I get to be supercreative within that hour. Every 30 seconds has got to be something different. I think it’s a lot of fun.”

High Desert Yoga plans six kid and family classes.The family Hatha class will be for all ages and include interactive and partner poses such as adults making a tunnel for kids to run through. A separate toddler class also will include parents.

The class for young kids, ages 4 to 6, will use storytelling, music and even art as well as have children act out poses such as downward dog. It also will introduce relaxation techniques.

The older children, ages 7 to 10, will use partner and cooperative poses. The class will be interactive and spontaneous with opportunities for selfexploration, Farrell says.

The teen yoga flow class will be more dynamic than an adult class with active poses to help express energy. “Teens tend to like to move a little more,” Farrell says.

She has spent more than six months finding the right people to teach at High Desert. Some of them are among the people coming from all over New Mexico to take the mini yogis teacher training.

Meyerson isn’t surprised by the demand for her class. She has seen yoga for kids taking off across the country.

“You’re seeing it growing in leaps and bounds in certain cities,” she says.

Having a corps of yoga instructors qualified to teach classes for children in different venues will be a boon to the entire community, says Farrell.

“The more yoga for kids the better,” she says.

A group of preschool children sit on yoga mats, feet in "butterfly pose" baddha konasana), chanting their classmate’s name in unison. "A-lex-a!" they sing, moving their knees up and...

"I've never been in a class that helps us into positions I've only seen in books, and marveled that anyone could even think of doing it, and you show us...

"Thank you so much. I'm not sure what Jules and I would do without you. You've changed our lives so much for the better. Bless you. We can never repay...

BodyPositivity.com December 19, 2016 "27 Yoga Influencers Share Their Body Positive Transformations" (Excerpt) by Minuca Elena   There is really no such thing as perfection when being body positive. I am...

By Shana Meyerson Go into any Los Angeles schoolroom today and chances are that many children will know what a downward dog is, will be able to demonstrate a cobra,...

man, i hate to publicize this even further…but have you seen this video??? http://www.youtube.com/watch?v=FnRmBD1I1kM abc news goes so far as to call this woman, lena fokina, a yoga guru! seriously???...

"I was just emailing to thank you for your help easing my transition into yoga. I had never done yoga before, but after being lucky enough to have you as...