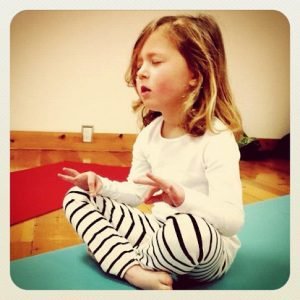 “But when he gets home each day, Saliba Smith takes a few minutes in his bedroom to sit calmly, spine straight, and meditate—a practice he learned from his yoga teacher, Shana Meyerson.”

Like most kids his age, 15-year-old Mason Saliba Smith has a schedule that sounds like an anxiety attack on paper. Classes at a competitive Los Angeles high school. A hectic social scene to navigate. A barrage of tests to take every week. But when he gets home each day, Saliba Smith takes a few minutes in his bedroom to sit calmly, spine straight, and meditate—a practice he learned from his yoga teacher, Shana Meyerson. “School deals a lot of stress to me,,” he says. “After yoga, I feel calm.” And calm is what most tweens and teens aren’t these days.One survey by the Lucile Packard Foundation for Children’s Health found that more than half of 9- to 17-year-olds studied were either moderately or highly stressed out. You can’t eliminate all stress, but you can help your child manage the pressure in healthy ways, whether that’s enrolling in a yoga class, making space at home for meditation, or cutting down on all those after-school commitments.

“Life is going to be stressful, we can’t protect our kids from it,” says Kenneth Ginsburg, M.D., author of A Parent’s Guide to Building Resilience in Children and Teens. “A parent’s challenge is to raise children with a wide repertoire of coping strategies.” Here’s help doing that.

[1] Allow downtime As much as it may pain you to see your teen lying on her bed like a slug, let her–time to unwind after school protects mental health. “For teenagers, downtime is productive because they’re thinking about their day, figuring things out,” says Roni Cohen Sandler, Ph.D., author of Stressed-Out Girls: Helping Them Thrive in the Age of Pressure. “They have to go through that to recharge.” Talk with your child about her preferences for after-school unwind time, and hold off on homework and chore demands until later. Make sure your child has a couple days each week free of after-school activities. The empty afternoons allow time for homework and play, so kids are less stressed the rest of the week.

[2] Break problems into pieces An overwhelming to-do list can paralyze your kid. Help him turn the mountain into a series of molehills. With younger children, that can mean dividing a spelling list into five words to memorize nightly. Older teens might need help organizing tasks for a major research paper, so work together to set priorities.

[3] Pencil in family dinners Studies have shown that spending even 20 minutes sharing a meal as a family three or four nights a week keeps kids and parents connected and communicative, which in turn makes children more resilient to the negative effects of stress. If dinner is usually a no-go at your house, breakfast, lunch or weekly family movie nights also fill the bill.

[4] Brainstorm mini vacations Ask your child, “If you had just 10 spare minutes a day, what would you do to really relax?” Post a list of ideas like petting the dog, emailing a friend, or re-reading Harry Potter. When she’s had a high-stress day at school, encourage her to take a 10-minute vacation before she does anything else.

[5] Play games According to Carl Arinoldo, a child psychologist and author of Essentials of Smart Parenting: Learning the Fine Art of Managing Your Children, some video and computer games in moderation can actually help reduce stress. Word or puzzle games that requires intense concentration, such as Tetris, Bookworm, Bejeweled, Chuzzle and Peggle, will engross your teen enough to put other pressures momentarily out of mind.

[6] Do guided imagery At mini yogis, a Los Angeles yoga studio for kids, owner Shana Meyerson leads children through an imagined sensory experience. “I say, ‘We’re walking through the park. What does the grass feel like on your feet? Can you feel the sunshine and the breeze? We’re eating ice cream now. What does it taste like?’” Have your child picture someplace in nature that she loves—the beach, the mountains, a garden. Focusing on the soothing mental image will help him relax.

[7] Protect sleep Experts recommend nine hours of sleep a night for teens, but high school seniors average under seven. Work with your child to limit late-night studying, try to enforce an earlier bedtime, and sneak in some restorative daytime sleep. Try the Power Nap Kit for Teens ($24.99; AtPeaceMedia.com). It comes with a CD of guided-imagery tracks to help your child fall asleep faster; a bell chimes after 30 minutes so he can get back to the books.

[8] Take the bite out of tests Teach tweens some instant calm-downs to use before tests, like those used by Susan Kaiser Greenland, director of InnerKids Foundation, a California nonprofit that teaches mindfulness to schoolchildren. For instance, have kids imagine that they’re enclosing themselves in an invisible bubble, where classmates can’t bother them. If something does distract them, tell them to pretend they’re putting the stray thought into a balloon and watching it blow away.
[9] Shift priorities Naturally you’re thrilled when your child brings home a stellar grade on a book report. But instead of focusing on the outcome, focus on the effort by praising hard work. Then follow up by asking such questions as, “What’s the most interesting thing you learned in class this week?” or “What do you like about the novel you’re reading now?” By making children proud of their own accomplishments and turning their attention to the joys of learning, you’ll nurture their natural desire to excel.
[10] Devise a less-stressful school schedule Despite the pressure to go all out at his competitive Palo Alto, California, high school, Zev Karlin-Neumann, 18, opted for only one Advanced Placement class his junior year. He quickly dropped another class as a senior when he realized it added too much work to an already heavy load. Parents are crucial in reviewing a child’s workload, and teaming up with a school couselor can help create a schedule that won’t overwork a student yet keep him on track for college–a strategy that worked for Zev, now a freshman at Stanford. “I knew what my limits were,” he said. In the end, that may be the greatest stress-buster of all.