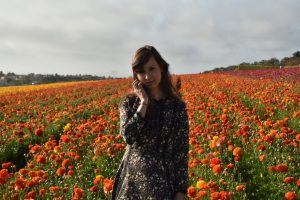 Yoga began to have an impact on Hanna’s life back in 2013 while living the hustle and bustle life of New York City trying to balance graduate school, a full time job and her personal life. Yoga became the quiet escape oasis, where her everyday routines and responsibilities would melt away. She remembers coming out of class into the busy streets maintaining in an aura of calmness while the city that never sleeps hastily moved past her. She moved to California in 2017 to pursue her career as a Pediatric Occupational Therapist and made yoga her daily practice to continue to maintain self-awareness and balance. Experiencing the life-altering benefits of Yoga drove Hanna to dive deeper into understanding the knowledge of the practice, which led her to complete a 200-hour Hatha/Vinyasa Yoga certification in Rishikesh, India in the summer of 2018. During her time in India she became inspired to synchronize her Occupational Therapy skills with Yoga. Once back in the U.S, her passion continued to grow which led her to find mini yogis where she completed her foundation teacher training with Shana Meyerson.

She believes merging these two arts has benefits that she wants to share with the children of the world. Her ultimate goal is to open an OT/YOGA facility where the emphasis is on making each child become more self-aware, gain confidence, and develop a relationship with themselves and the outside world…all while having fun.

"[The teacher training] was an inspired and exquisite time. I look forward to sharing all the wonderful tools and joyful movement with all my little yogi stars and their parents. The whole world needs more mini yogis!!!"