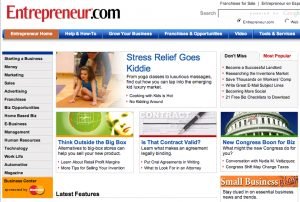 With yoga classes and spas for dogs popping up across the country, it makes sense that parents would be splurging on these services and related products for their children as well. Sure, some may roll their eyes at the notion of today’s youngsters, who have been spoon-fed luxuries such as cell phones and iPods from an early age, needing stress relief. But in pursuit of good parenting, tales of adults over-scheduling their kids with activities to “enrich” and “improve” them have become common.

“The intentions are honorable,” says Paul Kurnit, clinical professor of marketing at Pace University’s Lubin School of Business in New York City and founder and president of Kurnit Communications and KidShop. “But the results are often stressful. Kids want more time to hang out, do nothing and just plain chill.”

That’s where these hot kid-centric businesses come in. We found companies both large and small giving overwhelmed youngsters the chance to unwind and de-stress with friends in fun, comfortable settings. “This [trend] is likely to continue, grow and morph into more and more kid-specific versions of adult comfort, relaxation and pampering,” Kurnit predicts. And with children and teens influencing $600 billion a year of their parents’ money, according to a retail analyst with Kizer & Bender Speaking, it’s a market worth considering.

Next Generation of Yogis
Some flexible entrepreneurs have discovered that it’s never too early for kids to start practicing yoga. “When a child learns to meditate at an early age, they have an extraordinarily valuable tool for life,” says Shana Meyerson, founder of Los Angeles-based mini yogis. “Yoga teaches children how to step back from stress, put things in perspective, take some deep breaths and re-enter life from a calmer, more open perspective.” Her studio, which offers yoga instruction for both children and adults, generated more than $100,000 in gross sales last year and continues to grow by about 20 to 30 percent each year.

Expanding beyond studio classes, YogaKids International, founded in 1991 by Marsha and Don Wenig in Michigan City, Indiana, sells DVDs and how-to books for young yogis, in addition to the classes, programs and training it provides to communities and schools around the world through a network of facilitators. YogaKids also recently began offering YogaKids Tools for Schools, in-school yoga education programs.

Marsha says the company has sold more than 500,000 DVDs for children ages three to six. “The sales of our products and trainings continue to grow as the value of the market becomes better understood and more widely accessible,” she adds. Caryn and Monte Harrell, the owners of Fitness Beginnings in Happy Valley, Oregon, an online retailer of fitness videos for kids, have noticed the same trend. Though the site originally offered more traditional work-out videos, Monte says once they added yoga videos and products for kids, such as kits and mats, to their site, yoga became one of their best-selling categories.

Buddhaful Kids Yoga, based in Wellesley, Massachusetts, has found another way to expand yoga beyond the studio: yoga birthday parties. “They are the rage,” says Mary Kaye Chryssicas, the company’s owner and author of Breathe: Yoga for Teens, who performs two to three yoga parties a week. “Kid and teen yoga is booming.” She says her classes are always full several months before a sessions starts, with a wait list of about 10 to 15 eager yogis per session. Her average student is about 10 years old, though she teaches children from age five to 17.

Spa Treatments for the Tween Set

Along with yoga, spas get top billing as a way for adults to relax. From cotton candy mini-facials to modified massages, businesses are altering their treatments to appeal to a younger audience.

Resorts adding children’s services and treatments to their spa menus include the Spa Grande at Grand Wailea Resort Hotel & Spa in Maui, Hawaii. Seizing the opportunity to cater to younger guests, Spa Grande introduced the “Keiki” spa menu in 2005, featuring treatments such as a wave massage, tropical facial and a chocolate-coconut body polish. Last year alone, the spa performed more than 6,000 spa treatments for children ages 6 and up. The most popular treatment: the chocolate coconut massage, which averages about 44 requests per month.

Smaller day spas are also benefiting from the trend. Metamorphosis Day Spa, based in New York, was created in 1997 by Cleo Londono, an esthetician, and David Gakshteyn, a massage therapist. Though the spa initially offered treatments solely for adults, Londono saw the potential for children’s services around 2004, when she began giving treatments to her own children as a way to spend more time with them. “Later, I thought other parents–and kids–might feel the same way,” she says.

And she was right. Sales for 2006 topped seven figures. Londono says her average tween customer is about 12 years old and usually arrives in a group of girls. One of the most popular kid’s packages at Metamorphosis Day Spa is the candy land package for children ages nine to 12, which includes a cotton candy mini-facial, a half-hour massage with vanilla milkshake cream, and a bubble gum manicure and pedicure.

If there’s a market for yoga and spa treatments, there’s bound to be a market for dressing the kids during those activities. Cypress Luxury Bed & Bath Amenities, based in Sheffield, Massachusetts, provides hotels and spas around the country with bathrobes. One of their products: the Cypress children’s shawl robe is a kid-size version of their best-selling adult robe. CEO Gene Faul says a few of the spas and resorts requesting a large number of children’s spa robes include Pebble Beach Resorts, The Breakers Hotel & Resort and Lake Austin Spa Resort.

Sleepyheads.com based in Hopkins, Minnesota has gone a step farther by offering an entire product line of lounge and spa-wear for children. In the beginning, the company only offered adult pajamas and loungewear. But it didn’t take long for them to receive requests for kids’ items. Each year, the website has seen a 10 to 15 percent increase in children’s loungewear and sleepwear sales. Francoise Shirley, president and CEO, says the website had sales of about $2 million in 2006.

Of course, little yogis need to be comfortable–and stylish–too. Jennifer Abrams and Sara Abrams Luber, sisters and co-owners of Sugar Tush, say that after the birth of their children, they noticed the void in hip and comfortable clothing for their babies. So they took matters into their own hands and created a line of fashionable yoga frocks for babies and children up to age six. They even offer matching yoga tops for moms and their kids. “We would take the babies to yoga class and dress them in our tees and tanks,” Abrams says. “The response was instant and overwhelming.” Celebrity moms like Courtney Cox and Michelle Branch have even sent thank-you notes to the duo telling them how much they love their clothing.

If the yoga and spa scenes aren’t your thing, you can still explore how to make this market work for you, even if that just means tweaking one of your current products or services. But to meet the needs of this ever-changing demographic, it’s important to stay on top of the trends they’re following. In the world of children and teens, there’s nothing worse than being out of the loop. “Be facilitative, be kid aware, kid conscious and kid responsive,” advises Kurnit. “Make new products and services that truly enrich through comfort, relaxation and physical stimulation that both kids and parents will appreciate and enjoy.” 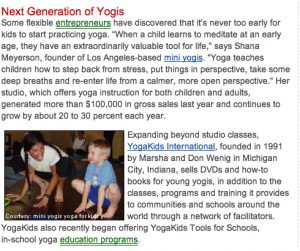 "I had such a wonderful time [at your teacher training] and it was so inspiring. I've read other books and material on teaching kids, but nothing has particularly grabbed me, but I really can see how your style will work...I feel very priveleged to have met you and to have learned from you."